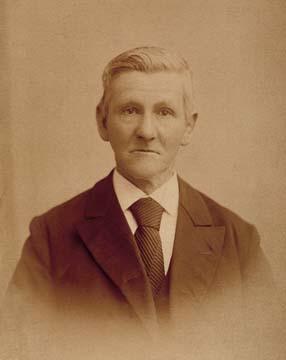 The latest immigrant to arrive in the United States, among my four main lines, was Thomas Rogers, my maternal great grandfather. The date of Thomas's arrival in America is 1846 according to the 1900 census for Paterson, Passaic, NJ. On 6 July 1848, Thomas was married to Martha Morrison, daughter of James Morrison and Jennie McCulloch, in Paterson, Passaic, New Jersey. Thomas and Martha were married by Rev. Ebenezer Wiggins, pastor of the First Reformed Church of Totowa, but their religious background was Presbyterian which seems to indicate that they were Scots/Irish. In fact, Thomas and Martha were charter members of the United Presbyterian Church on Smith Street, Paterson, Passaic, NJ, a church which was formed in 1852 in connection with the Reformed Presbyterian denomination. This church had a strict liturgy. At first there was no organ, no choir, nor vestments. Later these traditions were modified (or modernized), but at the expense of "peace in the congregation or membership." There is a similarity with this church and the traditions of the Presbyterian church of Scotland.

It is unknown whether Thomas's background is truly Scottish. His death record says he was born in Ireland and records found in the Bible of my Grandfather Samuel Rogers seem to concur. My grandfather's Bible had notes written in his own hand saying that Thomas Rogers was born 14 June 1828 in County Monaghan, Ireland. (Notes of my aunt, Laura E. Rogers, say that Thomas was born in Emyvale, townland Tony-finnigan, County Monaghan, Ireland. My aunt's notes state that they attended a parish in Auchnacloy, County Tyrone.) My grandfather's notes also say that Thomas was the son of John Rogers and Elizabeth Alexander and that Elizabeth's mother was a McKirk. At this point, the information regarding Thomas's birthplace and his family's origins remains unproven as I have been unable to find confirming records in Ireland. Thomas's cemetery records say that he was born in Carmeen, Ireland. Also, my grandfather left notes saying that Thomas's parents and Martha's parents were born in County Monaghan as well.

When this family came to America is no longer a mystery. Previously in this article I had written that I was unable to find a 1900 census for Thomas and Martha, even though I knew that they were living on Mill Street in Paterson, New Jersey at the time. I have since discovered that they were incorrectly soundexed because the census taker wrote their surname incorrectly. After checking the ward number for Mill Street, and then checking the enumeration districts for that ward, I was successfully able to discover Thomas and Martha, along with children Martha and Robert, on the 1900 census. According to the 1900 census, Thomas and Martha both came to America in 1846. If this is accurate, it would mean that they came as part of the Famine Immigrants and that they possibly knew each other before they came to America. Also according to this census, Thomas was naturalized as a citizen, and I found his naturalization papers the same day I discovered the census. Thomas was officially declared a citizen on November 4, 1867 in Paterson, Passaic, New Jersey.

There is also evidence, from vital records and censuses, to indicate that Thomas had an older brother, David. David's children were born first in New York and then the rest in New Jersey. The oldest of David's children was born in New York in 1837, so possibly Thomas came to America to join his brother and family. This is uncertain at this time.

When first married, Thomas and Martha lived in Paterson, NJ with Samuel McCullum and Letitia Morrison McCullum, apparently a sister of Martha's. (Thomas and Martha had a son David, and a daughter, Letitia, among their twelve children.) Thomas was never a wealthy man financially. The various censuses from 1850 until 1880 show that he was a machinist at Rogers Locomotive Works in Paterson, New Jersey. He and his wife successfully raised twelve known children, my grandfather, Samuel Rogers, being the youngest. The family seems to have stayed in one place, judging from the Paterson City Dirctories. They are always found living on Mill Street, Paterson, NJ.

"Thomas Rogers, one of Paterson's sturdy old mechanics and for many years an employee of Rogers Locomotive Works died yesterday at the age of 78 years. (He was 74 years according to his death record.) The deceased up to about two weeks ago had enjoyed good health but in passing down Clay St. Hill he slipped and fell on the ice, broke his left leg and had to be taken to the hospital. It is believed that shock hastened his death. (The official cause of death was given as pneumonia.) He was the father of Samuel, an architect (my grandfather), Thomas and Robert, letter carriers, and William Rogers. He also leaves several daughters." (Only his daughter, Martha, was alive at this time.)

It saddened me to see the place where Thomas, Martha, and several of their children are buried. In fact, the first time I tried to find their burial plot, I missed it entirely. The second time I visited, I made sure the office of Cedar Lawn Cemetery was open. They gave me a map and showed me where they were buried. After much hunting, my husband and I found the plot. There were two corner stones marking the plot, and no individual gravestone markers for each person. One cornerstone said "Thos. Rogers" on it, and the other said, "Lot 274". In the middle of this plot was a very large stone that said ROGERS on it. My initial reaction was that the family was too poor to have individual gravestones.

I recently came across some old notes belonging to my aunt, Laura E. Rogers, regarding this burial plot. She states in her notes that the old Rogers' plot had a center stone, and did indeed have individual markers for the graves, with chains connecting protective concrete posts. In 1937 it was modernized, and she believes, put into perpetual care, and the large stone with the name ROGERS on it was placed in the center of the plot.

Will of Thomas Rogers

I, Thomas Rogers of the city of Paterson, in the county of Passaic and State of New Jersey, being of sound mind, memory and understanding, do hereby make and publish this my last will and testament in manner as follows:

First - I do hereby direct that all my just debts and funeral expenses shall be paid as soon as may be after my decease.

Second - I give and bequeath to my beloved wife Martha Rogers all my personal property in whatsoever it may consist, for her use and benefit forever.

Fourth - I do hereby nominate and appoint my said sons Samuel and Robert Rogers executors of this my last will and testament, and I do hereby empower them and the survivors of them to sell and convey my said real estate and I hereby revoke all wills (former) by me made.

In witness whereof I have hereunto set my hand and seal this twenty-first day of January, eighteen hundred and ninety-nine.

Petition for Probate names the heirs and next of kin as being -
His Children: John Rogers residing in Newark, NJ; William, Thomas, Robert, and Martha residing in Paterson, NJ; and Samuel residing in Haledon, NJ, and all of full age.

NOTE: If anyone has information regarding this ROGERS family in Ireland, please let me know at DRistenbatt@dejazzd.com. Thank you.