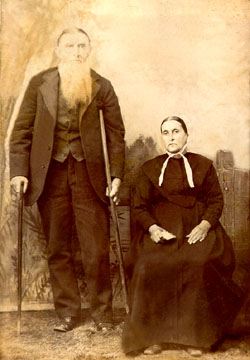 Of all the ancestors who served in the Civil War,
Jonathan B. Speicher is the only one of whom we have a photo.  This is a picture of Jonathan and of his wife, Christiana (Annie) Turpin, taken between circa 1891 (the date of Jonathan's accident, explained later in this article) and 1900, the date when Annie died.  The way in which we obtained this photo of David's great great paternal grandparents was quite serendipitous.  While attending a birthday party for one of David's cousins, we were shown a box of old family pictures.  (The late mother of this cousin was a sister to David's father.)  In the box was an envelope labelled "Mrs. John Ristenbatt." (David's paternal grandmother)  Looking at this picture which was not labelled, we of course noted the crutch and cane.  The identity of this ancestor suddenly occurred to me, as I recalled that David's great great grandfather Jonathan B. Speicher had unfortunatley lost part of his left leg, parts of fingers and also toes.  Jonathan survived the Civil War only to have a severe accident 28 years later.  (Jonathan served in the 173rd PA Infantry, Co. I, commanded by Col. Daniel Nagle. He was mustered in on 16 Oct. 1862 in this PA Draft Militia and mustered out at Harrisburg, PA on 17 August 1863.)

According to his Civil War pension application description, Jonathan B. Speicher was 5 feet, 9 inches, had red hair, brown eyes and a light complexion.  He was born 22 April 1836 Overbarn Township,Berks County, Pennsylvania, the son of John Speicher and Catherine Belleman.  He married Christiana (Annie) Turpin on 29 September 1859 Union Township, Lebanon County, Pennsylvania, the daughter of William Turpin and Mary Light. Also in these Civil War pension records, there is a notation made to the Commissioner of Pensions that Jonathan deserted in Nov. 1862 at Camp Curtin in Harrisburg, PA, but joined the regiment at Camp Ville in Norfolk, VA by Dec. 1862.  No other notation is made and no penalty is named for this desertion.

As mentioned earlier, Jonathan survived the War of the Rebellion without incident, only to have a devastating accident 28 years later.  On about 6 Nov. 1891, Jonathan fell into a burning lime kiln at work, being overcome by sulphur fumes.  He burned his left leg and left hand so severely that amputation was required of his left leg, of four fingers of his left hand, and of two toes on his right foot.  (One can see from this picture that the fingers on his left hand are not normal.)

A good bit of information is obtained from Jonathan's pension application about his overall health and his economic status, and places he was stationed at during his service.  Initially when he made his first pension application, he applied on the basis of having piles, which he claims were a result of exposure to wet and cold in Virginia.  (It seems, quite frankly, that the main reasons for pensions I've seen thus far, are rheumatism and piles!) A quote by fellow soldier, (and these are noted to show locations of this regiment) Michael Less, on 21 Oct. 1899 says that "in 1863 - sometime in the month of July - in the State of Virginia - at Stoney Creek, Mr. Speicher had the piles so bad that he could not carry lumber to put up a bridge across the said Stony Creek." The same Michael Less tells how when they were near Norfolk, VA in February of the same year, Jonathan Speicher was exposed to snow and rain on picket duty at an entrenchment. Pension affidavits also mention service at Goose Creek where the Fairfax Turnpike crosses in the state of Virginia.  Jonathan's son, John E. Speicher, claims also in 1899, that his father got the piles from exposure while in the service, and had purchased medicine for his father.  What is amazing is that almost the entire pension application for Jonathan Speicher is made on the basis of his having piles, rather than on the basis of his missing a leg, fingers and toes!  The permanent disability, according to the Act of June 27, 1890, did not have to have originated in the service.

One also learns from reading Jonathan Speicher's pension that he was a farm hand before the war and after his accident in 1891 he was a very poor man financially.  He died at the age of 68 in Cleona, Lebanon Co., PA, the husband of Christiana "Annie" Turbin, and father of 14 children! - Albert, Kate, Mary, John E., Liz, William T., Sally A., Anna, Moses, Noah P., Jennie, Emma, Ella, and Lydia Minerva.  Daughter, Emma, is David's great grandmother, married to George Lutz (who is actually a GROLL).  Jonathan and his wife are buried in the Annville United Zion Cemetery in Lebanon County, PA.