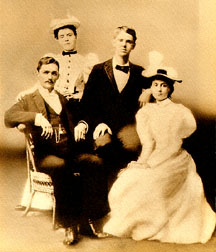 This photo is of my grandmother, her sister and their husbands. From left to right, William McCrea, Mary Delores ("Mae") Wright, Samuel Rogers, and Emily Bird Wright.

This is one of my favorite pictures of my maternal grandparents, as a young couple. I always knew my grandmother as a rather serious, taciturn woman and this picture presents me with a somewhat different image of her - softer and sweeter somehow - maybe it's the beautiful, soft white dress. It's taken with my grandmother's sister, Mary Delores (Mae) Wright, and her husband, William S. McCrea.

I never knew my grandfather, Samuel Rogers. He died 20 years before I was born. I am told he was as talkative as my grandmother was taciturn. He was the youngest of twelve children born to Thomas Rogers and Martha Morrison, who came to America from County Monaghan, Ireland in 1846. It is my understanding that my grandfather was the only child who graduated high school, and furthermore, went on to become an architect. One of the buildings he designed was the Alexander Hamilton Hotel, a lovely building in its day, in Paterson, Passaic, NJ. I am also told that he was a fun loving man, involved in his church (Episcopalian) and in his community. His parents were strict Scots/Irish Presbyterians - no music or frivolity of any kind in their church. As a result, my grandfather left that church when he married and joined the Episcopalian Church.

Both my grandfather and grandmother loved photography, taking and developing their own pictures. I have negatives of pictures that they took of their house in Haledon, Passaic, NJ.

I remember my grandmother, Emily Bird Wright Rogers, (and to this day I do not know why she has the middle name of Bird) loving to garden, both flowers and vegetables. It wasn't until later years, however, that I knew of her photography and other interests. Her parents, John Butterfield Wright and Laura Ann Lamb lived their later years in Asbury Park, New Jersey, and many family trips were taken to this ocean town. It's interesting that the family should visit here because the Wright family was originally of Burlington and Monmouth Counties. (My grandmother is a direct descendant of Mahlon Stacy, an English Quaker who is considered to be the founder of New Jersey's capitol, Trenton.) Interestingly, my grandfather also owned land in the Burlington County area, land which became the Mt. Holly Country Club. My grandmother died at the same age as my mother, ironically, and also was the first of all my grandparents to die in the same year. (1959) That was a very sad year. I'm glad I can pay tribute to my ancestors with my home page.