My Miller line is currently somewhat a dead-end in 1829 in New York City, New York.   This is the year that my great great grandfather, William Henry Garret Miller was born in New York City, as per his death record and his Civil War pension records.  His death record as found in the New Jersey State Archives, gives the names of his parents as John and what looks to be Elses or perhaps Elner Miller.  I was curious to know how many John Millers there were living in New York City during this time and checked the City Directories for the years before and after this as well.  There were quite a few, but not as many as I had imagined - only about 30.

Recently, at the Salt Lake City, Utah LDS Family History Library, I found an 1813 marriage for John MILLER and Ellen DAWSON in the Collegiate Dutch Reformed Church, dated November 15, 1813.  It is very possible that these are William Henry Garret MILLER's parents.  William Henry Garret MILLER and Elizabeth WANAMAKER named their first son, John Dawson MILLER.   They also named their first daughter, Eleanor Jane MILLER.   Considering the fact that they named their second son, Richard Henry MILLER and their second daughter, Katherine MILLER, it appears that even this late in time, they were following the Dutch naming practice.  While in Salt Lake City, I also researched a will from Morris County, New Jersey, for a Garret MILLER who died in 1861, Pequannock Township, Morris County, New Jersey.  This Garret left, among others, a bequest to his nephew, Garret, son of his brother, John MILLER.  Since William Henry Garret MILLER was supposed to go by the name Garret, at least as long as his father was living, it is possible that this 1861 Garret MILLER was the uncle of my William Henry Garret MILLER.  This 1861 Garret was age 83 on the 1860 Morris County Federal Population Census for Pequannock Twp.   While looking at these censuses for Pequannock Township, I also found a John and Ellen MILLER on both the 1850 and 1860 US Federal Population Censuses.  Their ages on the 1850 were 63 and 60 years, and on the 1860, they were 70 and 65 years.  So, they definitely were of age to be married in 1813, and to have a child in 1829, if this is the right John and Ellen MILLER.

The Civil War pension records for William Henry Garret Miller give some more clues about his father, John.  According to an affidavit from Henry R. Wanamaker, brother to William's wife, Elizabeth Wanamaker, John Miller was away when his son was baptized.   When he returned home, he said that his son was to be called Garret from that point on, never William Henry Garret.  John apparently did not approve of the name which his wife gave this new son!  Within this little story are some possible "clues" to this family.  First of all, one asks what occupation would require a man to be away at the time of his son's baptism - perhaps that of mariner?   Some type of merchant?   Secondly, it would appear that John did not like the names William Henry, but why?  Did he have something against a family member by the name of William Henry?  One can only conjecture.

This name situation caused some problems for Elizabeth Wanamaker Miller.  When she applied for a widow's pension, it took her about three years to prove that William H. G. Miller and Garret Miller were one and the same person.  When she married her husband, he used the name Garret Miller.  (They married 15 August 1849 at the Mahwah Evangelical Lutheran Church, according to William's pension papers.  This marriage, however, appears in the Saddle River Zion Lutheran Church Records.)  When he began his service in the Civil War, however, he entered under the name of William H. G. Miller.  This seems to be another possible clue.   Was his father deceased by this time that he would use his full name?

Perhaps the children of William Henry Garret and Elizabeth give another clue.  Their first son was named John Dawson Miller and the next son was named Richard Henry Miller.   Since Elizabeth's father was Richard Henry Wanamaker, one can only conjecture that William's father was John Dawson Miller or that the maiden name of William Henry Garret MILLER's mother was DAWSON.

If anyone has any information that might aid the search for my MILLER line, kindly let me know.   Any clues would be most appreciated and I can be reached at DRistenbatt@dejazzd.com. 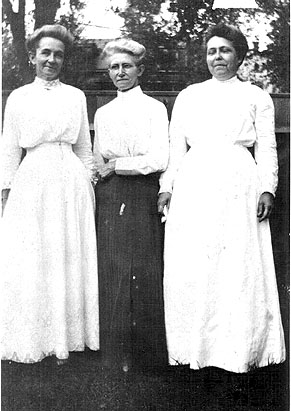 MILLER Sisters - Photo taken 1914
Left to right: Elsie Miller BERDAN, Katherine MILLER, and -?- .
It is probable that the third lady is Genevria Miller ROSE.
Does anyone know for sure?