NOTE: This very small cemetery has not been transcribed according to the Lebanon County Historical Society. While unable to give the exact wording on each of the fifteen stones, I am at least able to give a listing of those buried there, some with dates. The old Grubben Kirche or Grubbeland Church, as it was called, only lasted a few years. Land for this church was deeded in 1755 and two years later a church was built for the use of the Reformed and Lutheran congregations. By 1768, the church was abandoned and in dilapidated condition. I obtained some of the names found in this cemetery from an article entitled "Early And Historic Churches in Lebanon Valley Prior to 1800", Part I, paper read before the Lebanon County Historical Society, May 8, 1936, by Charles D. Weirick, Esq. sec./libr. of Society, Vol. XI, No. 1, pgs. 32-34. A special thank you goes to Ron Fernsler for sharing this article with me and for helping me to learn more about the FERNSLER family.

The picture of this cemetery, now a farm field, as one can see, was taken in February, 1995. The tombstones are piled up against the two stone walls, with the farm field inbetween. In 1995 the stones were in poor condition. Thankfully in 1931, a Mr. Ed H. Uhler noted some of the people with dates, mentioned in the article above. He is also a descendant of Johan Jacob ROHLAND, as is my husband. For more information on the FERNSLER family buried in this cemetery, be sure to visit Ron Fernsler's page at: Fernsler Family of Lebanon County, Pennsylvania or write to him at: fernslerr@geocities.com 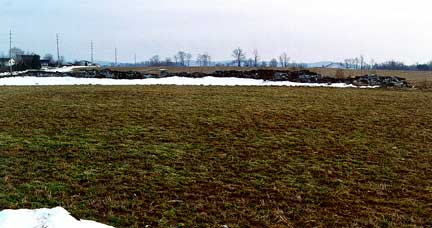 Grubbeland Cemetery: To get to this cemetery in South Lebanon Twp., Lebanon County, PA, take Rt. 422 East to Rt. 897 South. Turn right onto Fonderwhite Rd. and proceed down the lane on the right. It is located on the first farm on the right. The cemetery is by the remains of the stone wall to the left of the lane before the barn. In 1995 the tombstones were against the stone walls, some in pieces and broken. A number of my husband's direct line ROHLAND ancestors are buried here.