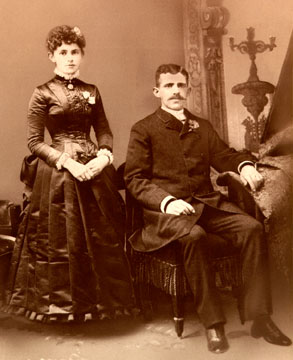 This is perhaps my favorite picture, of all the pictures I have of my ancestors. This picture was taken of my great grandparents, Richard H. Miller and Anna Terhune circa 1890. (How my great grandmother ever moved in this dress is beyond me! It's no wonder she is standing and Richard is sitting.) In this picture, Richard was about 30 years old, and Anna was about 24 years old, having married in March of 1887. This was a second marriage for Richard and a first for Anna. Richard died only 3 years after this picture was taken, of tuberculosis, and Anna remarried in 1894, William A. Watson, by whom she had one son, Ernest Watson. Richard and Anna had two children, my grandmother, Edna Miller and her brother, Richard H. Miller. My grandmother knew her step-father much better than she ever knew her real father as she was only 5 years old when Richard died. She was only 21 years old when her mother, Anna, died. She often spoke of her, though, in loving terms. I am so glad she preserved this beautiful picture.