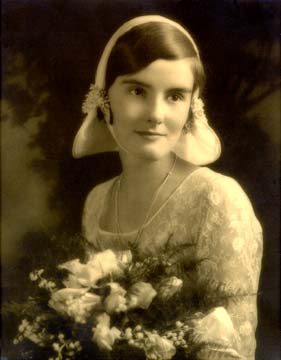 This is a picture of my mother, Emily Wright Rogers, taken in her wedding dress in 1930. She married my father, Donald H. Speer on 26 November 1930, at the Broadway Baptist Church in Paterson, New Jersey. They had known each other for a number of years. When my Grandmother, Edna Miller Speer, was looking for a piano teacher for my father, she chose my aunt, Laura Elizabeth Rogers, and the two families became acquainted. My mother wanted to capture my father's attention, so at a birthday party given in his honor, she gave him a bouquet of flowers. (My father was a great lover of flowers and all things beautiful. From my mother's picture, you can see he married a "beautiful flower.")

Looking at the date of their wedding, you can see they were married during the Depression. They were still able to go on a nice honeymoon, however. For a number of years they lived in Glen Rock, New Jersey and then had a house built in Wyckoff, Bergen County, New Jersey, where I grew up. - a lovely suburban town with lovely tree lined streets. My father was still living there at the time of his death in 1958. About thirteen years later my mother went to live with her unmarried sisters in Cape Cod, Massachusetts, which is where she died on November 22, 1994.

My mother was a somewhat shy and retiring person, but gentle and sensitive. She was an excellent cook (something I don't seem to have inherited!), and excellent homemaker - never worked outside of the home all the time that she was married. She enjoyed classical music as did my father. (I grew up listening to opera and all the classical artists.) It has been sad to see her pass away, as well as lady friends of the same generation during the past two years.