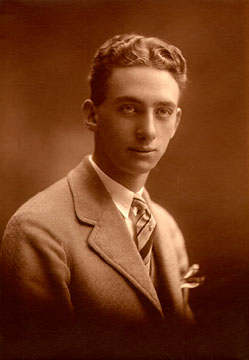 This is a picture of my father, Donald Henry Speer, ca. 1929. (one year before he got married) By profession, my father was a printer - owner/manager of the former Speer Press Printing Co., in Paterson, NJ. His real interests, though, were music and art. He painted many beautiful oil paintings, many of ocean scenes of Cape Cod, Massachusetts, one of his favorite places. He also loved music, particularly singing and piano. He sang tenor and even tried out for the Metropolitan Opera. He also taught voice lessons and conducted the Wyckoff, NJ Male Chorus.

Recently, a friend of mine sent me a written item about a Wyckoff Male Chorus performance, one I had never known about. It appears that the Chorus was invited by the well known Fred Waring to sing for the Eisenhower Rally at Madison Square Garden in New York City, 1952. Following is what Fred Waring wrote to my father:

This letter written by Fred Waring was sent on Election Day, 1952. My father said that although the chorus was strictly apolitical, the members sang at the rally for the thrill of working with such an outstanding director as Waring. It was a thrill for me to read about such a wonderful opportunity and honor given to my father and the Chorus which he directed!