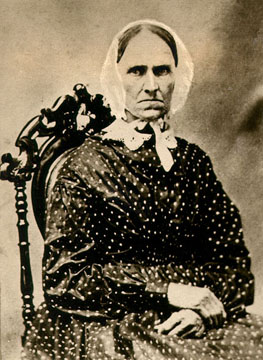 This is a photo of Ann/Nancy (Carter) Butterfield, my maternal great great great grandmother, daughter of Jacob and Effie/Euphemia CARTER, and wife of
John Butterfield.  Thanks to the research of my late aunt, Laura E. Rogers (1899-1973), I know that Ann had three sisters, Hannah and Phebe who were twins, and Charlotte.  (Subsequent research corroborates this. On the 1870 US Federal Population Census for New Hanover Township [Bordentown P.O.], Hannah, Phebe and Charlotte were living in the same house with John and Ann Butterfield, Dwelling 95, Family 109, page 15 of this census.)  Consequently, I was able to obtain death records for all three sisters from the New Jersey State Archives, as well as for a suspected brother, John E. Carter.  Because Ann's and Phebe's death records do not give the names of their parents, I was dependent upon the death records of the remaining siblings to obtain that information.  Both the death records of John and Charlotte give their parents as Jacob and Effie CARTER.  Hannah's parents are given as Jacob and R. CARTER.  As John was born before Hannah and Phebe, on 22 March 1804 in Burlington County, according to his death record, and Charlotte was born after Hannah and Phebe, on 25 October 1813 in Jacobstown, Burlington County, New Jersey, I can be reasonably certain that all had the same mother, so am uncertain as to what the "R" stands for on Hannah's death record.

Much of the information on Nancy/Ann's (She is given as Ann on censuses, her death record and her tombstone, but is named as Nancy in her will.) family has only been found within the past year, so therefore, is not in my current surnames' database online.  After much research, I have been able to put together the likely family of Jacob and Effie CARTER, but have not been able to find Jacob's ancestry.  (My late aunt had noted that this family had Georgia CARTER connections, but as of this time, I have not been able to verify that statement.)  Jacob first appears on the 1830 US Federal Population Census for Burlington County, New Jersey, under New Hanover Twp.  This is the first extant New Jersey Federal Population Census.  On this census, Jacob appears as one male, age 70-80 years, thus born between 1750 and 1760, and a female, most likely Effie, appears, age 60-70 years, thus born between 1760 and 1770.  Given the fact that Effie's last known child was born 1813, her birth year is probably closer to 1770.  Also on this 1830 census are two males, ages 20-30 years.  One of these males is most likely John E. Carter and the other male is an unknown, but is very likely William Carter, born circa 1800 and who married Ann BIRD in Monmouth County in 1841.  Thanks to the help of a fellow researcher, tax lists were discovered for Jacob CARTER in Chesterfield Township, where Jacob apparently lived before 1830.  A tax record records him there in 1809 and also between 1811 and 1813.  On these tax ratables' lists, Jacob CARTER is given as having 112 acres of land.  Interestingly, on their death records, Ann is given as being born in Jacobstown (ca 1800), and sister, Phebe is given as being born in Jacobstown. (in New Hanover Township)  Phebe's tombstone in the Jacobstown Cemetery gives her birth date as 10 August 1812.

Thanks to a deed, and the will of Phebe, two other siblings of Ann's were found.  Phebe CARTER's will was written 16 September 1870, she being of New Hanover Twp., Burlington County.  In this will, proved 2 March 1877, she gives a bequest to Charlotte GRANT daughter of Ephraim Grant and Anna B. Wright, and she also gives a bequest to Rebecca Dennis daughter of her sister, Mary Dennis.  (Anna Wright Grant was Phebe CARTER's grand niece.  This Anna, married first to Ephraim Grant and secondly to Edward Scoby was a daughter of Thomas and Mary mentioned in the next paragraph.)  In a Burlington County "deed", Book Q-10 of Deeds, dated 24 April 1882, John E. Carter and Ellen Green are attesting to the fact that they have each received $300.00 from the estate of Hannah CARTER deceased, from the hands of Charlotte CARTER, Administratrix of Hannah's estate.  (Hannah died 22 November 1881.)  John E. CARTER and Ellen GREEN are both named legal heirs-at-law of Hannah deceased.  So, it is therefore known that Ann/Nancy had two other siblings, Mary CARTER and Ellen CARTER.  (Ellen was first married to Joseph GILMORE.)

This photo of Ann/Nancy (Carter) Butterfield was most likely taken circa 1868, as I have another photo of her grandson, John Butterfield Wright, taken when he was 16 years old, according to my late aunt's notation on the photo.  Because the will of Ann/Nancy was written in Sidney, Shelby County, Ohio, and because the Civil War pension record of Ann/Nancy's grandson-in-law mentions that he lived in Sidney from 1871-1875, it is likely that the family had their photos taken before going out to Ohio.  Ann/Nancy (Carter) Butterfield and John Butterfield had only one known daughter, Mary Butterfield, who married Thomas Gregory Wright.  Rebecca Wright (daughter of Mary and Thomas) is the granddaughter who married William Henry Harrison Reed, and this is the couple who lived in Sidney, Shelby County, Ohio from 1871-1875.  It is unknown at this time what brought the family to this area of the country, but because Ann/Nancy wrote her will in Sidney during this time period, and her husband wrote his in Burlington County, New Jersey in 1868, it is known that at least these members of the family were living in Ohio for a short period of time.  It is known that two aunts (and their families) of Thomas Gregory Wright went to Ohio circa 1819, so there may have been family members for them to visit "out west."  Additionally, in 1855, Thomas Gregory Wright and his wife Mary Butterfield immigrated to Jerseyville, Illinois with their seven children, Rebecca H., Anna B., Joseph H., Ludevenia L., Thomas G. JR., John Butterfield Wright, and Edward A. WRIGHT.  According to a daughter of William Henry Harrison Reed and Rebecca Wright, with whom my late aunt spoke in 1944, Thomas, a wheelwright, and Mary, his wife, moved to Jerseyville in 1855 (substantiated by many deeds where Thomas is selling his land in 1855), and Thomas is reported to have died there, whereupon the rest of the family came back to Burlington County, New Jersey.  No death record or cemetery record has been found for Thomas, but Mary Butterfield is buried with her parents in Jacobstown Baptist Cemetery, Jacobstown, Burlington County, New Jersey.  Unfortunately, Mary died in 1860, thus leaving all seven children orphans.  Thereafter, they were raised by their grandparents, Ann/Nancy (Carter) Butterfield and John Butterfield.  All seven children are living with Ann and John on the 1860 US Federal Population Census in New Hanover Township, Burlington County, New Jersey.  Fortunately, John and Ann lived long enough for all of the children to reach adulthood - John until 1874 and Ann until 1877.  (No death record has been found for John, so it is uncertain whether he died in Ohio or New Jersey.)

Will of Nancy (Ann) CARTER

Note: Original spelling and punctuaton kept in this transcription.

Sidney, Ohio. January 31, 1872. in the Name of the Benevalent Father of All I Nancy Butterfield Being of Sound Mind and Memory Do Make and Declare this my last Will and Testament. i appoint Henry C. Bird and Rebecca Reed my exacutors [Donna note: Nancy's will was probated in Burlington County, New Jersey, and Henry C. Bird declined his appointment as an Executor.)  Sec. the 1th i give and Bequeath to my grand Daughter Rebeca Reed my two Cubbords and Table 1 half Dozen Cain Bottom Chairs one Cain Bottom Rocking Chair two Windsor & one Rush Bottom Chair my large looking glass one half Dozen Table Spoons one half Dozen Silver Spoons one half Dozen Knives & Forks and one Bead Stead and Beading on Ingrain & one Rag Carpet one Set of Dishes and Tumblers and all of my Wairing Apparial and all other goods that may Belong to me  Sec. the 2th i Do give and Bequeath to my two great Grand Children Son and Daughter of Harison & Rebeca Reed by name Anthony and Ella Reed the Sum of three Houndred Dollars With two years interest in the hands of Isick [Carilan?] in Burlington Co. New Jersey the said Money to be left on interest untill the Said Anthony and Ella Reed Become of Age unless the said Rebeca Reed is in Actual want and then she is to have the Benfet of the 200 Dollars three Houndred Dollars[sic] for the sopart of the children. Signed Nancy # Butterfield. (her mark)

Children of Jacob and Effie CARTER

If anyone has information that might further my BUTTERFIELD and CARTER research, please kindly let me know.  Any clues would be most appreciated and I can be reached at DRistenbatt@dejazzd.com