Following is a summary of the activities and engagements of the 13th New Jersey Regiment during the War of the Rebellion, or Civil War, as it is more commonly called in the United States. 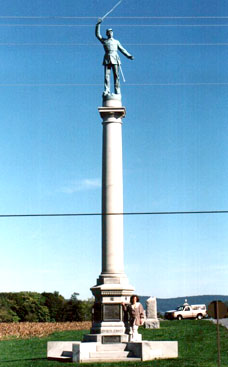 SOURCE: A Compendium of the War of the Rebellion by Frederick H. DYER, late 7th Connecticut Volunteers; The Press of Morningside Bookshop, Dayton, Ohio.

ADDITIONAL INFORMATION: I was recently able to glean a bit more information about this Regiment, after a visit to the National Military Park Visitor's Center at Chancellorsville, Virginia.  A very kind and knowledgeable Park Ranger showed me the maps of the Battle of Chancellorsville, which give all the regiments and their positions on each day of the battle.  I can see now why my great great grandfather, Henry H. Speer, Jr., was shot in the arm on May 3, 1863.   During this battle, the 13th New Jersey was in the thick of the fight, right at the front line.  On May 3rd, this regiment was in a vise between two sections of the Confederate Army.  Their battle location would have been very close to Hazel Grove, which is Stop #9 on the National Park Service map for the Battle of Chancellorsville.  I also learned from this Park Ranger that the "baptism of fire" for this Regiment was the Battle of Antietam, which is indicated by the service information above.   Additionally, the 13th NJ Regiment was at the Battle of Gettysburg, but did not see all the action that the 12th Corps did.  As indicated previously, their Gettysburg location was near Culp's Hill and Spangler's Spring. 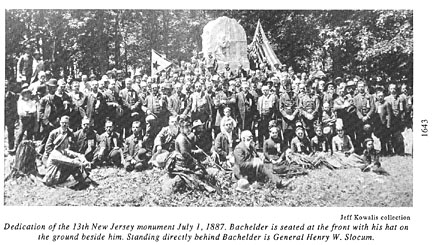 13th NJ Monument Dedication July 1, 1887 at Gettysburg National Park
Photo compliments of Art Stone from the 13th NJ Reactivated Regiment
If anyone knows the names of any of these soldiers, please contact me at DRistenbatt@dejazzd.com.
It is possible that my great great grandfather, Henry H. Speer Jr. is in this photo.